We hope you love the products we recommend! Just so you know, we may collect a share of sales or other compensation from the links on this page. Thank you if you use our links, we really appreciate it!

If you are interested in ballroom dancing, then you may have heard about the use of Cuban heels in a dance shoe.

But have you ever stopped to wonder, “what is a Cuban heel on a shoe?”

Ballroom dance shoes feature a wide variety of heels, but the Cuban heel is perhaps unique because it is used in both male and female dance shoes.

Essentially, it is a straight, medium-high heel with a slightly curved back.

It is referred to as a ‘knock-on heel’.

This is because the heel is constructed and attached without any further additions.

They have a rich history and have made several appearances in pop culture.

Origin and Appearances of Cuban Heels Throughout History

Cuban heels first made an appearance when they were worn by Persian soldiers in the 9th century.

They had a different purpose at the time and were worn to provide stability to soldiers as they rode on horseback.

If you notice, the trend has continued with cowboy boots that also feature heels.

In the 1600s, Cuban heels were worn by the Upper classes in France.

Even then, they were worn by French men, and not women.

In fact, women only started to wear Cuban heels as they were associated with the social power held by men in French society.

These heels were also longer than the Cuban heels that are worn today.

A shorter (and present) version of the Cuban heel made an appearance in England in the 20th century.

Once again, the meaning associated with the heels changed, and this time, they were considered to be a symbol of rebellion among the youth.

Cuban heels have been worn by many popular artists since then.

The Beatles, for instance, wore a higher version of the Cuban heel in 1963.

They were also worn by the Rolling stones who wore Cuban heel boots during the mid-sixties.

In the case of the Beatles, the Cuban heel combined with the Chelsea boot style to give you the Beetle Boot.

This featured a Cuban heel on a close-fitting shoe that reached the ankles and had pointed toe.

Cuban heels were worn in 1977 by John Travolta in the movie Saturday Night Fever.

This appearance is probably the most iconic moment for the Cuban heel throughout history.

They were even worn by Al Pacino in Scarface when he played the role of Tony Montana.

Even Prince wore them in the 1980s, and they went on to become a part of his signature style.

All said and done, the next time someone asks you “what is a Cuban heel on a shoe”, you can dazzle them with a wide array of references from history.

As far as heels go, the Cuban heel is pretty iconic in its own right.

Of course, it plays an even more important role in ballroom dancing, especially because it is dancing that helped root the Cuban heel quite firmly into the present.

Read on to find out how.

It was worn by male dancers when they performed the flamenco or the tango.

Their use in dancing has outlasted everything else, and Cuban heels continue to be popular in Latin forms of ballroom dancing such as the Cha-Cha-Cha, the Samba, and the Rumba.

[READ: Who are the Rising Stars of Ballroom Dancing?]

All these dance styles are performed wearing moderately high heels, and Cuban heels serve that purpose.

To a large extent, these heels have helped differentiate Latin dance shoes from other kinds of shoes.

Most standard dance shoes feature a heel of 1 inch.

However, Latin dance shoes feature Cuban heels that are one and a half inches or two inches long.

As the name suggests, these shoes are more suitable for Latin forms of dance than general ballroom dance as the heel length can make it difficult to move.

In the case of women, a shoe carrying a flared heel or a Cuban heel can provide more stability.

They make it easier for women to move and are preferable for beginners in dancing.

To Sum It Up

We hope you got your answer to, what is a Cuban heel on a shoe.

These heels have enjoyed their place in history and played a different role each time.

Today, they are most often found on Latin dance shoes as they complement

Latin dance styles by offering a great deal of functionality and support.

Given their past and present, one thing is certain – the Cuban heel is not going anywhere and is here to stay. 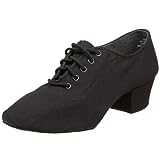