Swing dancing is a popular form of dance that is enjoyed by people of all ages. But where did swing dancing originate?

And what are the different styles of swing dance? In this blog post, we’ll answer these questions and more. Let’s take a closer look.

Where Did Swing Dance Originate?

Swing dance originates in Harlem in the 1920s among the predominantly African American community during the jazz music craze, but its roots stretch back even further.

To understand how swing dancing came to be, it is important to understand the role of dancing in the African American community.

Dancing had long been a method of expression by the early 20th century.

While still held in bondage, slaves used dancing to communicate their profound emotions about their experiences.

It was a way to connect with others that transcended language and often had a profoundly spiritual element.

Even after the end of slavery, members of the African American community continued to engage in joyful, mournful dancing and music-making as a means of expression and communication.

By the 1920s, jazz music had evolved as a truly unique American style, with its roots in African, creole, and religious music.

Along with it came swing dancing, a form of dance suited to jazz’s spontaneity and modernism.

During this time, Harlem, located in New York City in northern Manhattan, was the epicenter of African American culture—the Harlem Renaissance, which was a flourishing of black creative genius, was underway.

Therefore, jazz music was abundant, and swing was born inside jazz clubs.

As other cultural movements took hold in the 1920s, jazz music became more and more popular in the mainstream.

As this happened, white Americans sought out jazz.

Many white New Yorkers ventured into Harlem for brief forays in a practice that became known as “slumming.”

While there, many were captivated by the unstructured, high-energy dancing they witnessed among the black community.

It is important to remember that this style of dancing was very unlike any that they had experienced before.

In large part, dancing was a highly structured and disciplined art, almost ritualistic.

Its social implications and sexual undertones were strictly controlled.

Therefore, jazz appeared to them to be completely new and incredibly exuberant.

As more and more people were exposed to swing dancing, it spread and became standardized.

By the early 1930s, a few distinct swing dances emerged and were widely known, especially outside the African American community.

It was popular in cities around the United States, especially in southern California (Los Angeles).

The Charleston—still danced today—was one of the first, which then evolved into the Lindy Charleston, which combined moves from another popular swing dance, the Lindy Hop.

Around the same time, the Balboa, or Bal, emerged in more conservative settings.

It compromised the fast movements of swing, which allowed revelers to do it to jazz music, but left out turns and kicks and other more energetic moves.

By the decade’s end, several more standard swing dances had emerged, including the Shag (or St. Louis Shag), the Big Apple, and the Little Apple.

While most of these either began in predominantly black clubs or evolved from dances that did, they were perennially popular with whites (and other ethnic communities).

They often danced as an act of rebellion by younger generations.

As jazz music faded as the dominant American style (replaced with rock ’n’ roll and other styles), so did swing dancing.

As the decades of the 20th century wore on, it became more standardized with regional styles, including East Coast Swing and West Coast swing.

In addition, other styles, such as swing specifically for rock ’n’ roll, acrobatic, jive, and boogie-woogie, also emerged.

Typically, these styles were danced to specific subgenres of music.

Swing Dancing Into the Present

In some ways, what we know as swing dancing today is very different from its origins.

Some of the spontaneity has been lost in favor of choreographed routines and derivations of classic steps.

However, that has also allowed the style to persist long past its heyday and avoided its relegation to relic.

Moreover, swing dancing has retained its characteristic excitement, energy, and attitude, perhaps the most important of all. 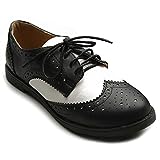 OK, if you’re going swing dancing, you need some cool footwear. A popular choice for swing dancing is the ollio brand.

Ollio is a new shoe company that’s taking the swing style by storm. They have a patented design, and their shoes are made from the best materials to keep your feet comfortable for hours.

Do you want something a little different that still has that classic 1950s style? Take a look at Oxford.

These shoes aren’t specifically designed for dancing, which presents some difficulties.

However, they are overall comfy and made to be worn all day. Because they’re flat, it’s less important to train in them.

Therefore, these shoes could be worn simply for dress rehearsals, performances, or contests. Nothing completes the swing appearance like a slick pair of oxfords.

Where Did Swing Dance Originate Summary

As you can see, Swing dancing is one of the most energetic and fun types of dance.

Even better, anyone can learn to swing dance without the years of technical training that ballet, tap, jazz, and other styles entail.

Part of the reason for this lies in the origins of swing dance.